It has been a busy start to the year across the domain name industry. A couple of registries have already reached significant milestones this year, and the industry as a whole continues to grow at a steady rate.

On the ccTLD-front, AusRegistry reported that they reached two million .com.au domains under management this week. There are some pretty tight rules surrounding the registration of .com.au domain names, so the figure represents an impressive milestone for Australia. Given it’s relatively small population, it’s clear that Australians see value in .com.au domain names and that the extension provides a sense of trust for both those using .com.au domains and also for Internet users in the country.

Public Interest Registry (PIR) who operate the .org registry also hit a milestone, announcing recently that they had surpassed nine million domains under management. They also noted that growth in 2010 was 10.3% for the extension. The .org domain has added more than five million domains since 2005 and is the third largest generic top-level domain (gTLD) in the world. 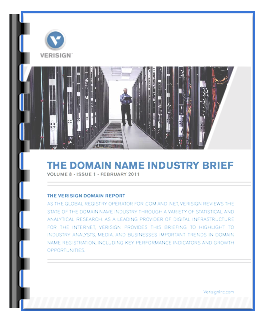 February also saw the release of the latest issue of the VeriSign Domain Industry Brief. This quarterly report looks at all sectors of the domain world and identifies interesting trends and stats in gTLDs and ccTLDs, and provides a good evaluation of the health of the industry as a whole.

The latest brief showed continued growth in domains under management with 205.3 million domain registrations across all TLDs. That’s a year-over-year growth rate of about 6.3%. In ccTLDs, a total of 80.1 million domains are registered representing a year-over-year growth rate of 0.3%. Its important to note that growth in ccTLDs was affected by a contraction in the number of .cn domains under management as a result of significant restrictions placed on new and current .cn registrations by the Chinese government.

Strong growth seen in .org and across a number of ccTLDs

Of the 205.3 million total domains registered, 105.2 million are .com or .net, showing that those two gTLD extensions still command some impressive numbers despite the rise in ccTLDs over the past few years. On the ccTLD side, .de leads the way, outpacing even .net to stand as the second largest registry in the world. Second amongst ccTLDs is .uk, followed by .cn and then .nl, .eu and .ru.

How to Take Advantage

While these numbers and reports make for some interesting reading, it’s also important to note that they can be a great help in identifying potential growth markets, and in evaluating your own businesses. ccTLDs with above average growth rates are often indicative of countries where the Internet industry as a whole is seeing expansion. You don’t have to look far to see opportunities in places like Poland, or in Central America and Mexico in particular. Currently the top 10 ccTLDs represent 61% of all ccTLDs registered, but as countries and economies emerge, expect to see that number drop as the Internet penetrates new, growing markets.

To evaluate your own business, look at industry renewal and growth rates. Renewal rates for .com and .net rose slightly to about 73% in Q4, 2010. Is that in line with what you see in your business? Keep in mind that your rates should probably exceed that as the renewal rates for domains “in use” or attached to hosting tend to be higher than the overall average.

All in all, it has been another good year for the industry as a whole. Based on early news from registries like .au and .org, 2011 is looking solid as well.