Last week, I joined close to 200 other attendees at the inaugural .nxt conference in San Francisco. The conference, which was sponsored in part by OpenSRS, brought together industry leaders to discuss the impact of ICANN’s new Top Level Domains (TLD) program, which will likely see hundreds of new domain name extensions introduced to the Internet.

The conference featured a wide range of keynote speakers and sessions. Among the highlights was an update on the new TLD process from ICANN SVP Kurt Pritz (pictured below), a keynote by .CO registry CEO Juan Diego Calle on the runaway success of their re-launch, and an executive roundtable discussion (which included our CEO, Elliot Noss) on a wide variety of topics related to new TLDs. 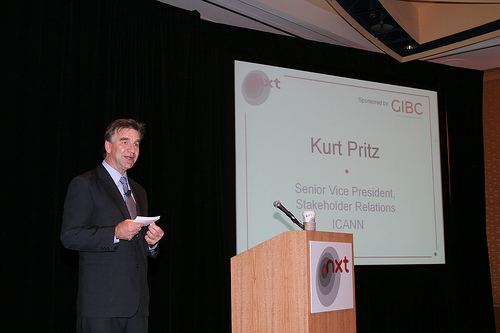 In between the keynotes and excellent hallway conversations, I also attended some great sessions. And at the end of the two-day conference, I went home with several key takeaways:

The conference was a great opportunity to discuss one of the biggest Internet developments in recent years with some of the industry’s leaders. Once ICANN approves the new TLD program, I wouldn’t be surprised to see the announcement of the next .nxt conference.

Thanks to .net conference organizer Kieren McCarthy for the photos of the show and for putting them out under a Creative Commons License.