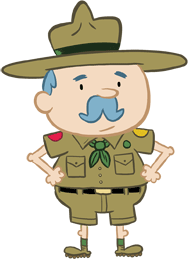 November is Movember month, an annual fundraising event where participants grow moustaches to raise awareness and funds that will help to eventually bring an end to prostate cancer, the #1 cancer affecting men around the globe.

For the youngsters not familiar with Magnum P.I., the actor known as Tom Selleck has played a more recent role as Dr. Richard Burke aka Monica’s boyfriend on the TV show, Friends.

Before Movember provided the necessary cover, Tom Selleck was often to blame whenever a man fooled himself into believing he’d look good with a moustache… a credit formerly given to Burt Reynolds.

This Movember, our very own Dave Woroch is putting his best whiskers forward for the cause and with some coaxing he even let us snap a few photos for this post. We think he bears an uncanny resemblance to a young Tom Skerritt aka “Viper”, in the 1986 hit, Top Gun. But don’t tell him that.

If you have no plans to grow an upper lip follicle forest of your own, why not take a moment and support Viper in his efforts? Visit his Movember fundraising page and make a pledge and learn more: http://mobro.co/ViperDave

Are you participating in Movember?

We want to know! Just leave a comment below with a link to your Movember profile, or send us a tweet to @OpenSRS. As the end of November approaches, we’ll pledge $50 to a few of our favourite ‘staches.

Since its humble beginnings in Melbourne Australia, Movember has grown to become a truly global movement inspiring more than 1.1 Million Mo Bros and Mo Sistas to participate, with formal campaigns in Australia, New Zealand, the US, Canada, the UK, Finland, the Netherlands, Spain, South Africa and Ireland. In addition, Movember is aware of Mo Bros and Mo Sistas supporting the campaign and men’s health cause across the globe, from Russia to Dubai, Hong Kong to Antarctica, Rio de Janeiro to Mumbai, and everywhere in between.

No matter the country or city, Movember will continue to work to change established habits and attitudes men have about their health, to educate men about the health risks they face, getting them to act on that knowledge thereby increasing the chances of early detection, diagnosis and effective treatment.

Via the moustache, Movember aims to fulfill its vision of having an everlasting impact on the face of men’s health by continuing to spark conversation and spread awareness of men’s health each year.

3 thoughts on “A Movember that would make Magnum P.I. proud”