If you’re a fan of the Discovery Channel, you may have seen our very own Lucas Cochran during Daily Planet’s, “Future Tech” a new segment that covers Tech, Gaming and Social Media.

Lucas is no stranger to the camera. In 2009, he had his own show called “Pimp My PC” on Butterscotch TV, where he helped viewers creatively customize, personalize and trick out their boring beige box PCs.

During business hours at Tucows, Lucas is our go-to guy for all things related to IT and can be counted on to handle everything from the deployment of an authentication cluster, to troubleshooting audio/video issues on Skype. 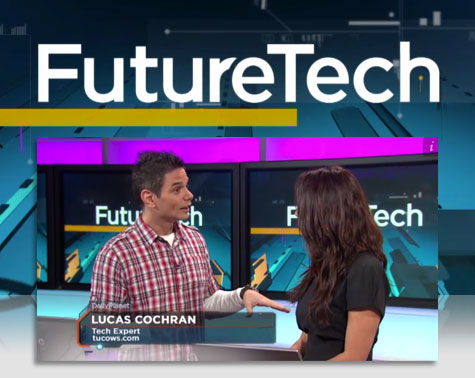 This man has the geek cred of ‘Revenge of the Nerds’ lead character Lewis Skolnick, combined with the stage presence and comedic timing of Jerry Lewis, and the innovative and entrepreneurial spirit of Ron Popeil. When George Clooney needs help with the ladies AND programming his VCR, Lucas is #1 in his speed dial. At least, he will be as soon as George sees this episode of FutureTech.

A word of caution however: never (ever) agree to play Star Wars trivia with this man (you will lose), and never, ever bet Lucas that he’ll be unable to get an old Logitech webcam working on a MacBook Pro (I lost $5 bucks to him this way just last week).

But seriously, Lucas is a great example of the super talented people we get to spend out days with at Tucows/OpenSRS. His intrinsic desire to teach himself new things, combined with his super friendly nature and ability to teach others will undoubtedly make him a great addition to the Daily Planet team and we’re all extremely proud of him here at Tucows.

To see what Lucas has to say, check out the segment of FutureTech on this week’s episode of Daily Planet.