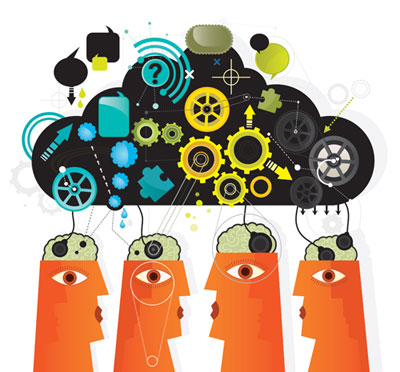 How often have you spoken with somebody and you can just tell that they’re not paying attention to what you’re saying? Their eyes look away for only a second, but that’s all it takes for you to know they’re just waiting for you to stop talking so they can blurt out whatever it is they want to say.

It can be frustrating for those with something to say because conversations are as much about listening as they are about talking.

Listening is silent. It doesn’t surprise and it will never shock. Perhaps that’s why talking has been so popular; It’s easy to keep a person’s attention while we’re making noise, isn’t it?

By listening, we can hear all about the challenges, the pains, frustrations, joys and successes of those we care about. We can empathize by listening and show that we care about all the little (and big) things going on with the people in our lives and the customers we talk to.

Recognizing that we wanted to become better listeners at OpenSRS, a few months ago, we launched a plan that would see the formation of the OpenSRS Reseller Advisory Council. It’s an initiative that begins tomorrow and it’s aimed at getting some of our smartest, creative, engaged Resellers to talk, while we listen.

What is the goal of the Council? 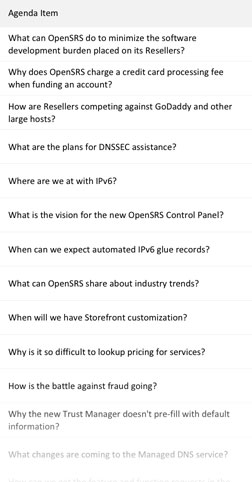 We created the Advisory Council with a specific purpose; to equip an underserved segment of our Reseller base with a voice that we can listen to. We plan to solicit their thoughts and benefit from their experience. We think we all have a lot to gain by doing this.

We’re going to listen to what the founding members have to say and do our best to tie what we hear to real business outcomes. The current plan is a conference call each quarter, with access to a private forum to continue the conversation after the calls. We may, depending on the needs of the group, create smaller committees to discuss, debate and come to the larger group with recommendations.

In the end, we’re going to move forward. It might be an inch forward, and not a mile to start with, but it will be a step forward.

The topics for the agenda were created from comments and answers given in the Advisory Council application form and we’re also crowd-sourcing additional topics and voting on the ones most important to the members. You can see the most popular agenda items at the right.

We don’t get to choose what to talk about, the members do.

How were the Council members chosen?

It started with an email to a couple thousand already engaged Resellers, inviting them to complete the application form. We had over 100 Resellers apply.

From there, we identified a group of 40 individuals, the majority of them senior executives, or company founders working at companies that have  100 to 1,000 domain names under management with OpenSRS.

If you completed an application form and did not hear from us, we’re sorry about that… you will soon. It’s not that we haven’t approved you, it’s just that we’re taking things a bit slow as we get started and another Reseller may have been a better fit this time around.

If you’re a reseller outside of North America, we’re running a separate Council (at least in the beginning), so we’ll be touching base with you to get the ball rolling. We’ll also be sharing what we learned from the first Council meeting.

Do you want to get involved?

Super! Let us know in the comments and we’ll follow-up as we run additional recruitment efforts. Be warned though, membership in the Council is not a free ride. There’s work involved and we’ll have high expectations of you if you’re accepted.

We’re really exciting about this initiative and it is our hope that the founding members of the Advisory Council will play a critically important role in helping us become better listeners as we continue our efforts to build the world’s most reseller friendly, super-focused provider of Domain Names, SSL and Email services!