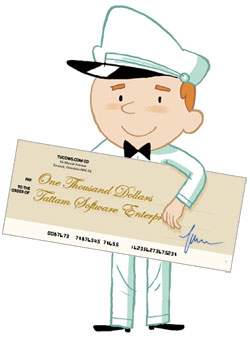 Before Microsoft had the good sense to build Internet support into its Windows operating system, there was Peter Tattam and his software, Trumpet Winsock.

Personally, I don’t think of myself as being old enough to talk about how tough we had it during the “old days”, but man, the Internet sure was a different place 17 years ago.

At the risk of offending the technical veterans with some elementary details, Winsock (a mashup of the words Windows + socket) equipped the Microsoft Windows operating system with the ability to ‘speak’ the Internet Protocol (TCP/IP). Back in the “olden” days of 1995, Windows computers were often not even connected to the local office network, never mind the globally-connected Internet.

The Trumpet Winsock software was distributed under a shareware, “try before you buy” license, which means you could use it on a trial basis, but after the period expired, you were legally required to pay for it. The problem was that people rarely paid for the software after the trial period ended.

Trumpet Winsock was hugely popular in the days of Windows 3.1, mostly due to the inclusion of the software in many popular computer magazines and distribution by Internet Service Providers. The wide distribution channel these magazines offered should have been a good thing for Tattam Software; Internet users signed up by the hundreds, and then thousands, and then hundreds of thousands. But ultimately, although they used the software, many Internet users didn’t care or didn’t bother to register (and pay) for it.

In the end, Peter and his company received very little financial compensation for what many would agree was software that enabled a connection to a global network that has positively impacted the lives of millions.

At Tucows / OpenSRS, at our very core, we believe the Internet is the greatest agent for positive change the world has ever seen. Trumpet Winsock accelerated Internet adoption during a time when Microsoft failed to offer Internet connectivity in the OS. So, earlier this week, we wanted to thank Mr. Tattam by recognizing his efforts with Trumpet Winsock by way of a small corporate donation.

If you’re a former Trumpet Winsock user, we’d love it if you would also take a moment to thank Mr. Tattam for his hard work and dedication in building one of the most popular on-ramps to the greatest resource the world has ever seen. Donations are accepted via Paypal at the thanksfortrumpetwinsock.com website.

6 thoughts on “Tooting the Horn of an Internet Legend: Peter Tattam”