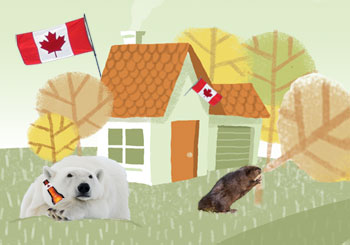 This coming Friday our offices will be closed to celebrate Canada Day.

Canada Day, also affectionately referred to as Canada’s Birthday, is a federal statutory holiday celebrating the anniversary of the July 1, 1867, enactment of the British North America Act, today called the Constitution Act, 1867, which united three British colonies into a single country, called Canada within the British Empire.

Originally called Dominion Day, the name was changed in 1982, the year that Canada gained full independence from the United Kingdom. Canada Day observances take place throughout Canada as well as internationally.

Historical facts aside, we think it’s the perfect long weekend for our pet polar bears (each Canadian has one you know) to just chill out and enjoy a cold one on a warm, sunny day. The beaver on the other hand… we’ve tried to get him to relax, but without resorting to prescription meds, there doesn’t seem to be much chance of that.

For those of you more interested in serious business, here are the hours of operation during the holiday:

Our Technical Support team continues to be available 24/7 to assist you.

Please note that during this closure, there will be: