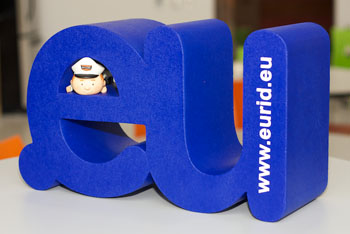 April 7th, 2011, marks the fifth birthday of the .eu domain extension. Since the launch back in 2006, over 3.4 million .eu domains have been registered. EURid, the operator of .eu, says registrations have doubled in the past 5 years, and that .eu now sits ninth overall amongst all TLDs.

The launch of .eu was particularly strong – about 1.7 million domains were registered that first month back in 2006. According to EURid, since then, “Lithuania, Poland, the Czech Republic, Slovakia and Estonia have had the strongest .eu growth rates and Germany, the Netherlands, the United Kingdom, France and Poland have emerged as .eu’s largest markets.”

They also point to growth rates higher than the local ccTLD in five EU member countries, including Germany, which has a very strong ccTLD in .de:

To celebrate the fifth birthday, we’re rolling out a .eu promotion starting April 7th, and continuing through the end of May, 2011. Two-year .eu registrations will be just $9.99 (USD) instead of the usual $14. You’ll have to sign up for this promo – complete terms are listed on the .eu promotion signup page.

Changes to how .eu Registrations Work

EURid is also making some changes to the way .eu registrations work to bring them more in line with other TLDs. Effective April 7th, 2011, you’ll be able to register .eu domains for terms of 1-10 years. Previously, .eu domains were only available in one-year terms. We’ve updated our documentation to reflect this change and you should also take note of a couple of other changes to how .eu domains work, specifically around transfers and expiry dates.

You might want to check out .eu Identity Magazine, which is published by EURid and contains some great information about .eu and the people and companies who are using a .eu domain effectively. It’s available for download in PDF format.

We also provide some marketing assets for your use in promoting .eu. Those can be found in our .eu Marketing Resources section.